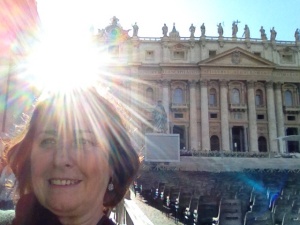 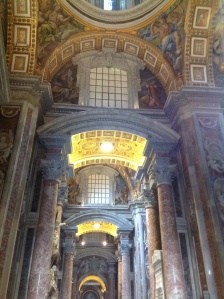 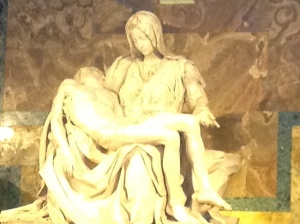 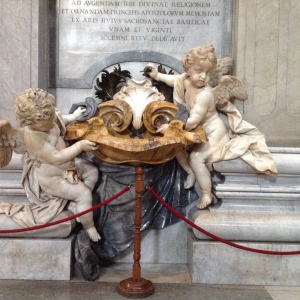 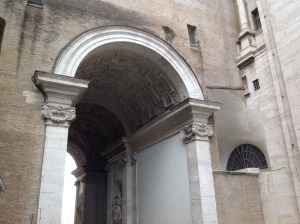 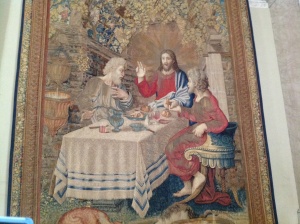 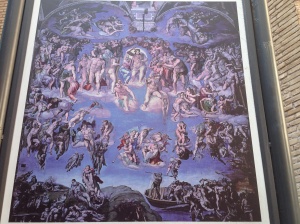 After a quick breakfast we headed to the train station. Imagine 4 women dragging suitcases, carry-ons and purses down stairs, up stairs, across streets, up curbs, up 15 stairs to the train station, across the parking lot to the terminal to find out our train was delayed.

It ended up 35 minutes behind schedule due to switch problems. Hey, it’s like taking the Lakeshore West downtown to the office. I said to the gals, traveling in Europe is quite often a hurry up and wait scenario. You just never know and patience is then key.

The train ride, once we left the station was quite smooth. Yordie and Jo-Ann snoozed I tried but just couldn’t fall asleep. The countryside was beautiful with parcels of land containing fields of sunflowers. Most of them were beyond their prime and wilted. I could only imagine how spectacular they looked 30 days ago standing tall in their golden glory. The land in this part of the country is quite lush with olive groves and vineyards. Row after row of grapes. They will need to harvest them to make up for the wine we are drinking. We are definitely contributing to the Italian economy.

We arrived in Rome at 1:05 pm. Leaving the station, we dragged our bags down the cobblestone streets a few blocks back to the Torino Hotel and checked back in.

If you are following this trip, you might remember we were in St. Peter’s Square last Sunday and heard Pope Francis deliver his weekly message. What we didn’t get to do at that time was see the Vatican Museum, Sistine Chapel or inside St. Peter’s Basilica. The ladies and I decided that if we made it back to Rome in time and we would find a tour, and book it. We found one that left at 2:00 pm. Remember, we had just travelled in from Florence by train.

On to the bus we went and drove with the other tourists to Vatican City. We started with an orientation by the guide of the Sistine Chapel. You are unable to speak or take photos inside the chapel. He explained that it took 4 years for Michelangelo to paint the The Last Judgement Day that up hangs at one end of the chapel. It took him 4 years. It was 25 years later he painted the ceiling. Michelangelo did not sign his painting but painted himself into his work. You will see a picture of Michelangelo’s face in the hanging skin of a prophet on the Last Judgement Day. He also entertained himself by painting comedic scenes into the ceiling. He painted a drunk Noah. Michelangelo actually preferred sculpting than painting. What a talent he was.

We learned all this and more before we began our tour. The first stop was the Vatican Museum. What an amazing collection of marble statues, paintings, tapestries and relics. The ceilings are incredible!

Next we went inside the chapel. You are supposed to be quiet, and most people are. Occasionally you will hear a video played that says, “SHHHH, SHHHH, SILENCIO PER FAVORE!” it is actually louder than the people whispering. I could have stayed there for hours, but it was a little warm.

Next we went to St. Peter’s Basilica. I walked in and saw the largest holy water font I have ever seen. I could take a bath in it. Look at the picture with the cherubs. This place is huge inside. The sculpture that Michelangelo gave to a Pope as a gift is inside on the right. It is incredible. The arches, sculptures, altar, fonts and the entire feel was so special. All of a sudden the organ began playing and there were men too far away from me to see, but they were dressed in red….cardinals perhaps celebrating mass? No one knew. The chanting was beautiful.

Outside, we headed into St. Peter’s Square. Empty today except for a few tourists as it was late in the day. We were fortunate to see the Pope’s guard.

We decided the tour would end here and tried to fetch a taxi back to Piazza Navone. Yordie had spotted a store she wanted to return to. The exercise was futile. No one wanted to take 4 ladies. The decision was to walk. My feet were very sore, but I managed to keep up. Standing is actually harder than walking. Since shopping is not my favourite activity, I sat in the piazza watching the crowds. The evening was beautiful, music played and some people danced, sang or just strolled. The twinkle lights were beautiful and you could smell fresh Italian food.

I was really enjoying a vendor tease a little boy with a very large helium balloon of Spider-Man. The little boy was so adorable. I could have stayed longer but as Jo-Ann says, “My big gut is eating my little gut!” That is exactly what I felt.

We headed into some of the side streets and found a place to eat. It looked reasonable and in an area further away from the piazza. We ordered wine (are you surprised?) and all 4 of us ordered the homemade pasta with seafood.

It arrived looking amazing, however, the mussels were so tiny and many of the clam and mussel shells were missing their owners. Really? We complained to the waiter who ignored us. The service was rude and the gypsies come into the eating area to ask for money from patrons after they play a song. It was uncomfortable. The pasta was okay but when I order seafood, I want seafood!

There was a couple looking at the menu and having a hard time deciding whether to come in. The woman caught my eye and I gave her a nod no. They quickly turned on their heels and left. The waiter was angry because he was getting a hard time from his manager. We asked to see the manager and explained the food was not up to par. Jo-Ann told him I was a food critic from Canada. LOL Not too far from the truth. Bottom line, he ignored what we told him so he is getting a poor review.

I would NOT recommend Il Salimbecco on Via del Canto de Nelli, Rome, Italy – service is poor, rude staff and food is overpriced for what you pay.

We took a cab ride home and my feet thanked everyone. Even good shoes are tested on cobblestones. We headed to the store to grab some Chianti for our final roof top terrace evening in Rome. We sat under the moonlight, enjoyed our beverages before heading to bed.

Our cab was coming at 9:30 to begin our Greece leg of our trip.

My top 10 of Italy (in no particular order)

One thought on “Pope, Pizza, and Piazzas – Arrivederci Roma!”