Leaving Rabanal was difficult for me. I loved the feel of this village and its people but today will be a milestone – Cruz de Ferro (the Iron Cross). It is such a beautiful day and today I will ceremoniously release the rocks I’ve been carrying since the beginning of the Camino to represent my burdens.

Before I left Rabanel, I had a pleasant chat with the Davis family from BC (parents and 3 young girls) where we had a group picture taken. They are so sweet and inspiring. I hope to see them  down the line. I met the 3 Italians who rescued golden Labrador puppies. Here is Santiago with his owner. 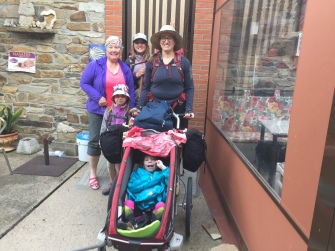 The ascent was gradual and beautiful with a coffee break in Foncebadon with Pat. I couldn’t wait to get to Cruz de Ferro. With all the hype I was waiting for a spiritual awakening of some sort. I mean, reaching this distance after walking 24-25 days is a feat unto itself. Seeing Cruz de Ferro was spectacular and the experience of walking up the hill of rocks left by millions before me was more of a photo op than an awakening. I dropped my rocks and shells, said a quick prayer, had my picture taken and stumbled back down the hill quickly to let others have their moment. 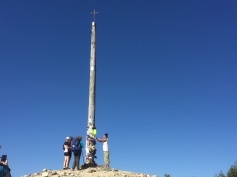 When I came down there was a young girl looking so despondent with her head down. I made eye contact with her and I reached out my arms to her. She jumped up and accepted my hug and cried heavily in my arms. She thanked me with a gracias and we went our separate ways. That is how it goes on the Camino; one day you find an angel and sometimes you become one.

You would think after carrying all those burdens for 100’s of km and releasing them at Cruz de Ferro would mean the walk would get easier. NOT!!! It was a horrific downhill ascent over rock. My knees when I arrived in Acebo were jelly. Yordie video chatted me as I was going downhill so she saw the terrain and effort it took. Adding to the difficulty was the heat, 31 degrees.

I was grateful to have sent my backpack forward or I would still be on that mountain!

Once safe and sound at the albergue, I had a grande San Miguel beer, a shower and dinner. I met 4 Norwegian friends and I spent the next hour practicing their names: Dragrun, Walkon, Viglis and Torbjörg. What a laugh we had. They are all in their 70s and hike like they are in their teens. I call them the Norwegian mountain goats! They passed me twice during the day. I like this group, they have such a zest for life.

The albergue was high in the mountains and the wind just howled that night. I tossed and turned listening to the snoring, the screeching wind and the screaming pain of my knees.

I felt bad for the Frenchman in the bottom bunk. I apologized for tossing and turning but apparently he didn’t hear a thing. Leaving Acebo, we were told to take the road to save our knees. For the first 5 km I was on the road but then this German couple told me to follow them. I did and boy did I regret that!!!! 9.4 km of rocky descent. By the time I made it to the bottom, I was toast!!!

At this point there had not been a café con leche in sight but there were a couple of entrepreneurial Spaniards selling fresh fruit for donativo (a donation). My favorite was the cherry seller. I hit Molinaseca around 10:30 am and guess who were sitting there enjoying their breakfast – the Norwegians! They certainly didn’t look worse for wear and they were so concerned for me because my face gets very red. I told them I was fine and they left me as they were going an additional 5 km past where I was going to stop. I still shake my head. One thing you shouldn’t do on the Camino is compare yourself to others. You would drive yourself crazy!

I was going to Ponferrada today but first the farmacia (pharmacy) for Naproxen for my arthritis. They sell it over the counter (50 tablets = 4.20 euro). I pay a heck of a lot more in Canada. The pharmacist reminded me to hydrate because of the heat (31C) and suggested I stay in Molinaseca. 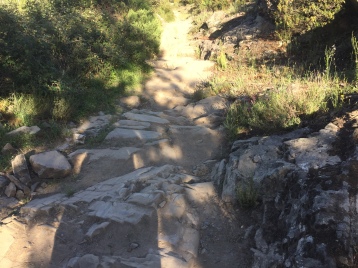 The walk to Ponferrada was brutally hot, and the words of the pharmacist rang in my ears. The walk was mostly uphill on asphalt and it was hotter than Hades! When I finally arrived, my albergue was on the other side of town and it was awesome! Modern conveniences and ultra clean.

Once showered and set for tomorrow I went in search for food. I found this awesome bistro across from the Knights of Templar castle and enjoyed a spectacular ensalada mixta while enjoying the view and imagining soldiers defending their city. I wanted my grandson Nixon to see this and Skyped him on his way to school. It was nice touching base with him as it had been quite a while. 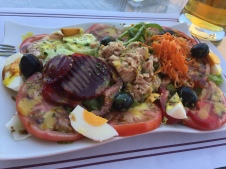 Back at the albergue, my room had 3 bunks and single bed. I was the only woman and only English-speaker sharing with 6 men. Talk about being out of my comfort zone! The saving grace was I had a bottom bunk for the night. Believe it or not, I slept like a baby.