Looking out the window and all I could see was fog. Katerin and Charlotte (roomies) decided it best we leave together. One quick stop at the ATM and off we went into the dark.

I spotted Sophie at the last albergue as we were leaving town. I checked in with her to see how she was doing and she was struggling with her blisters. She might take a bus to the next phase. As a fellow pilgrim, you cannot help but feel for your fellow peregrinos especially when you know the effort that goes into doing this. Knowing she was safe and OK, I continued down the path. Katerin and Charlotte are fast walkers and so within 10 minutes they left me in their dust. LOL

Today’s destination is Palais de Reis where according to my guide little remains to remind us of the past but the name derives from Pallatium Regis, palace of the Visigothic king Witiza who reigned from 702 to 710. It blows my mind how far back some of these buildings and structures date.  Today though, not too much to see. Not historically nor in the present. The fog was pea-soup thick.

​
I had to walk 7.5 km to get my first coffee in Gonzar but stopped on a rock before to rest. A gentleman walked by me and I wished him a buen camino (Remember, I am one of those annoying morning people) and all he could do was grunt. Obviously caffeine-deprived or a zombie. He looked like an extra from The Night of the Living Dead. I took a photo of him as he walked into the mist. We likely all looked like him and badly in need of coffee.

The pilgrim path is starting to get busy as promised and the resources to support the Camino Frances are becoming more frequent and modern. The cafe break took longer then normal as everyone leaving Portomarin converged on Gonzar after 7.8 km for breakfast. Usually you just walk up to a counter, order and be handed your food. After eating, you pay and leave.

Today, there was a huge line up where you placed your order, gave them your name, paid for it and then found a seat. Someone would bring your food out bobbing and weaving through the crowd yelling your name. It worked, but the process person in me kept thinking how much easier and quieter it would be if they handed us a ticket. LOL

The fog eventually burned off and we had another beautiful day. I was taking it slow up to this point but today I wanted to test my physical limits. Instead of the normal 20 km I decided to try a full 25 km. My feet were feeling good, and the legs were strong so let’s see what this girl could do.

I knew my Norwegian friends were stopping in Melide for the night but unfortunately we didn’t get to cross paths. I stopped there which was the 15 km mark. It looked like many pilgrims we’re going to stop as it had a beautiful church an old monastery with lots of history and it is famous for pulpo. Not to be derailed by a little food poisoning, I decided to try it again and found this lovely café on the way out of town. Who should be there but Cliff and Holly and while I was enjoying a cold beer, and some smoked queso with grilled pulpo, the Dublin gang appeared. The conversation made for a lovely, lovely break.  I sat under a beautiful arbour with a vine that provided shade from the midday sun. There were exotic plants that I had never seen before. The owner, and elderly woman obviously loved her garden and was told us us about some of the plants she had. The vine that was growing above our heads was a kiwi plant. The owner picked some herbs from her garden and gave them to all of us to put in our backpacks to help with odor. It was quite cute.

Off again we went moving towards our destination. I looked at the map in my guide and it looked relatively flat for the remainder of the day which gave me the boost to continue on for another 10 K but as I found out the book lies!!!

I was so happy to bump into Sophie at a rest stop. We had a quick bevy and a snack to fuel the body before hitting the home stretch. She was pushing through.

The ascent into Palais de Reis was never ending. Uphill for many kilometers. When you’re tired, and hot it can get a little discouraging. I rounded another corner and saw Jeanette sitting quietly on a stump having a cigarette. I don’t know how she does it. I waved and my poles click clacked past her keeping the momentum going afraid that if I stopped I wouldn’t be able to continue. These hills are killers! I finally arrived in the village and who do I see but Gary, Price and Jane all freshly showered and enjoying another bottle of Rioja wine. I swear some of these people taxi ahead. LOL 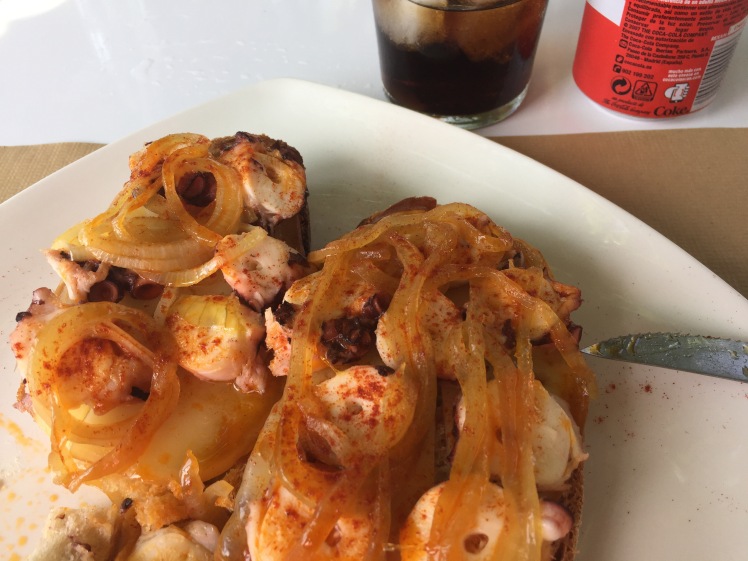 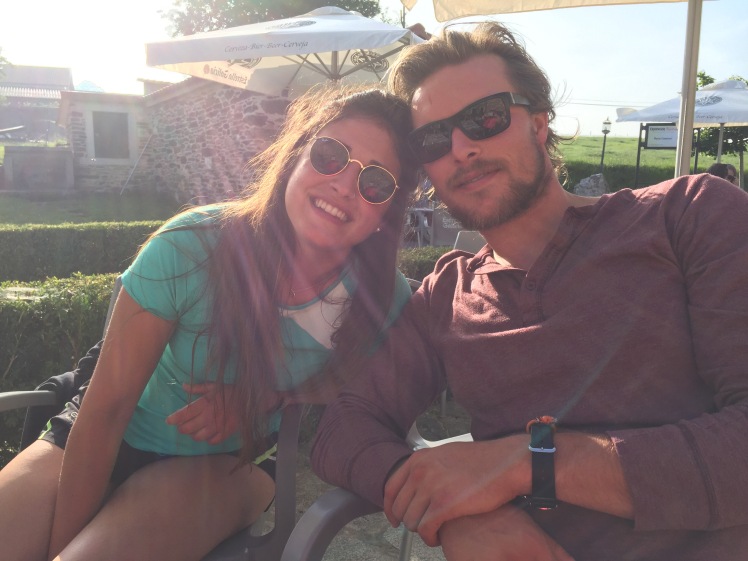 I staggered past them to the albergue where I was happy to find I had a lower bunk tonight. After a quick shower I joined the gang for a drink, some food and laughs. I turned in by 10 pm and none the worse for wear and found out my body could withstand a 25 km day. Just really tired. 68 km to go! 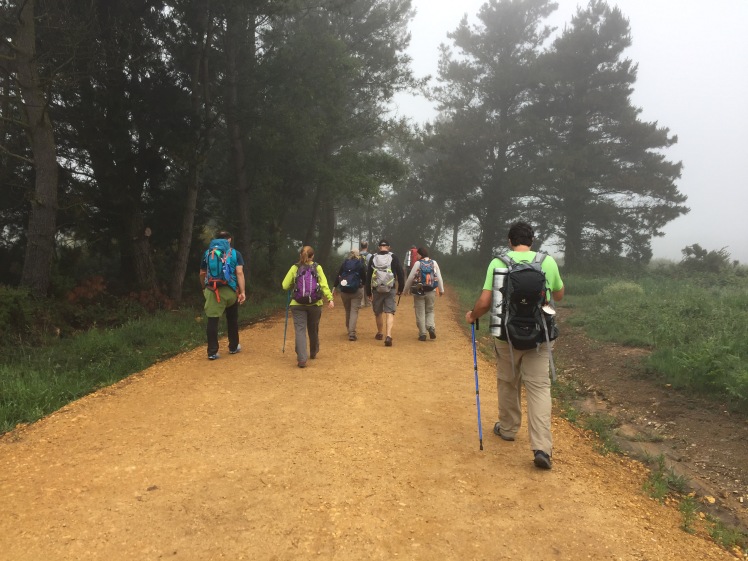