Feeling not too bad today as I had a good night sleep. I stopped at the top of the stone bridge and looked back at the town and headed out solo along this beautiful dirt path that followed the ridge. Birds are singing and the spring air is fresh. On my way out of town a pregnant horse was let out to find her own way to the pasture. She turned and looked at me as I clicked. 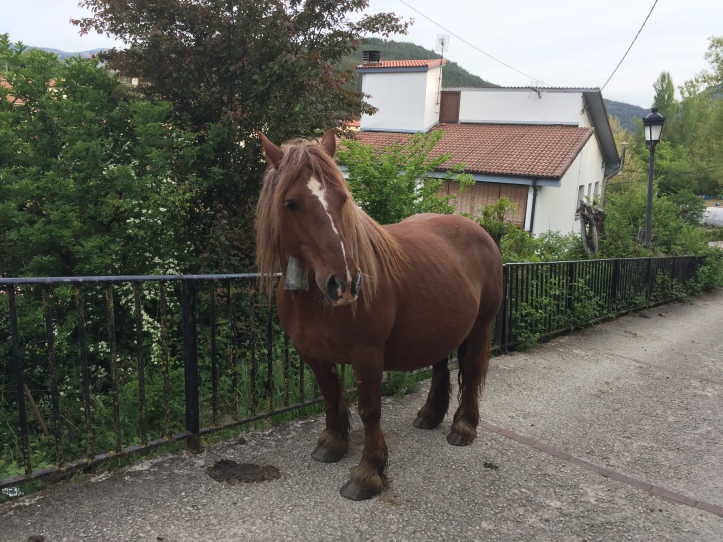 I am following an elderly man who is moving at about the same pace as me. It is so beautiful with the sun shining and a gentle breeze.

Moving pretty well today though my Achilles’ tendon seems aggravated but perhaps a little more walking will warm it up.  I walked past a house overlooking the valley and 3 dogs approached me growling. I stopped with poles ready and the owner called them off with no apologies. It must be difficult living on the Camino with so many people walking by and not all are courteous or respectful. This was confirmed when I stopped further up the road at an abbey. A gentleman from South Africa and his friends bought it and are restoring it. He told me that those that live here along the Camino can be hostile towards peregrinos. He said that he had to shoo a lady from looking in his kitchen window this morning. Just wandered over to his house and decided to look in.  Even when told to move on she would not leave. He then went on to say there are those that just leave their garbage strewn wherever. That is so sad to me. 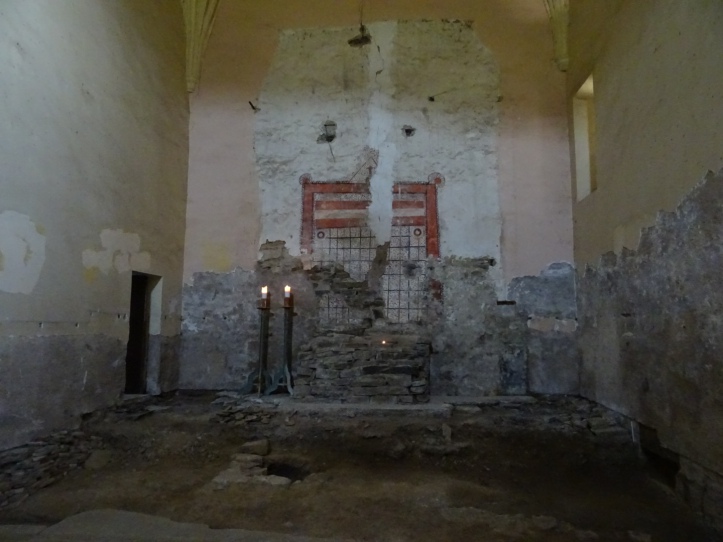 Oh did I tell you I’m going to buy a village? I shared with him my dream of living in Spain and he said I could pick up an entire village for under 50,000 euro.

After this lovely break and collecting another cello (stamp) I moved on, up and over hills following the river to Akarette There my phone pinged and I received a message of encouragement from my sons Phil and Joel. It really meant a lot!

In the distance I could hear a waterfall and the man that I had been following was picnicking on a rock with his feet in the cool water. He smiled and we waved at each other. I wonder if our paths will cross again. Continuing down the path the spring flowers are blooming and the trees create a canopy of greenery. It’s like being in a strange land with birds chirping and water rushing to the river.

It was time to rest my legs and grab a bite. Crossing a bridge there was this beautiful oasis in Zuriain with an albergue and restaurant along the water. I enjoyed a mushroom tortilla and an ensalada with a San Miguel beer while sitting on a veranda overlooking the river. Chickens and roosters were scratching in the dirt and looking for breadcrumbs which are plentiful because everything is served with bread in this part of the country. 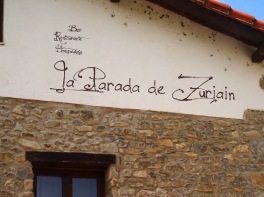 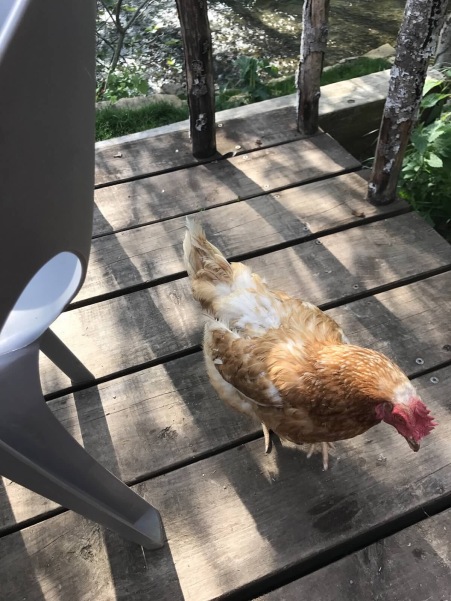 I’ve iced my leg and thought why not stop here in this beautiful location for the night but unfortunately they were fully booked. I was just about to head to the nun’s abbey in (Zadlikian) when two German ladies I met in Zubiri earlier asked if I would be interested in sharing a cab into Pamplona. One of them was struggling.  I thought, why not? I could find an albergue, wash these stinky clothes and rest my leg. My intention was to spend 2 nights in Pamplona so this will work for sure. My portion 6 euro. Lunch 3.30 euro.

The cab driver was very sweet and was kind to find us accommodation at Casa Ibarrola by the gate of Pamplona.

What a lovely place, more modern than what I’ve been staying in. It has a communal kitchen where you can buy and cook for yourself, rain forest showers, laundry and cool pods to sleep in that have their own lockable cubby, 2 power outlets, a light and pull down blind for privacy.

You begin to appreciate simple things like the fragrance of a flower or even your soap. I was never so happy to strip down and throw all my clothes in a washer. Heading for the shower which was long and hot, I stepped out and realized my towel was in the wash! What’s a girl to do? I had to dry off using my dirty clothes. 😔Yuck! LOL

The shower was an improvement for certain.

Afterwards I went out on the town with Berthold (Switzerland) and Suzie (Georgia, USA). We hit a tapas bar and drank a few glasses of vino tinto. I didn’t care because I was going to stay another night. OMG this tapas thing is awesome. Works of art! Thursday night was a fun time. Drinks were 2 for 1 and tapas were thrown in. Lots of fun, music and laughter. My leg wasn’t hurting as much now. I slept like a baby.

I was sitting at the common table organizing  my pack the next day when I received an email from Sue. She was just coming into Pamplona and so I organized a bed for her at the same albergue.

Sue had her shower, did her laundry and now it was time to eat. We ended up in Meson del la Tortilla. This was their specialty and only 1/2 block away from the hostel. I walked in and the speakers are blaring Jethro Tull (Bungle in the Jungle). I started laughing and yelled out “Jethro Tull” and the guy behind the bar was so excited I knew this music. Here’s the two of us having a moment. By the way, one of the best tortilla I’ve eaten. Lots of laughs. 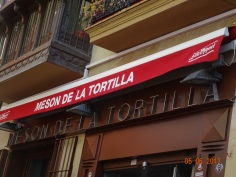 Afterwards I limped while Sue walked. We went to the cathedral, out for tapas, had a coffee con leche at Cafe Iruña where Hemingway spent some time. We walked to the bullring where the Running of the Bulls end for the San Fermin festival and then back to the albergue after a quick supermercado trip. Must have breakfast and snacks. I know I should have rested but there is so much to see! 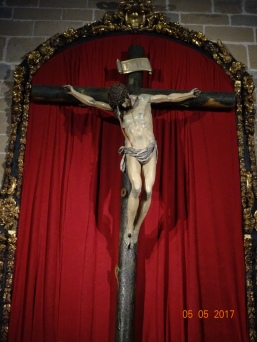 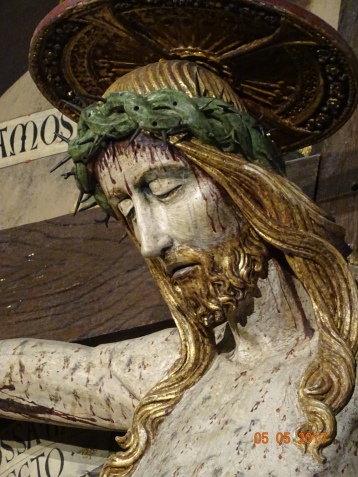 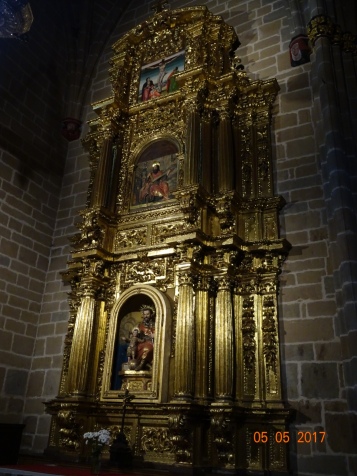 One of the other guests I met wanted to go out so we ended up taking her out for tapas and wine. She had been cooped up for a couple of days with a cold. Everyone helps each other on the Camino. I’m happy to say she shared her cold with me. Dang it!

Depending how the leg feels, I might stay one more night in Pamplona. I like this city. Sue and Ruth are leaving early.