Lars (Sweden) and I had breakfast together. I am dying for an egg breakfast but no it is tostada with jam and cafe con leche. We grabbed some cakes for a snack later and I can as able to get a banana for the road.

Heading out of Castrojeriz was lovely and in front of me was Alto Mostelares at 900 metres. My butt is getting a work out for certain. I remember a wise soul who told me to listen to the mountain, and that is exactly what I did. I went slow but kept moving. On the way up I met Betty from Ottawa. She was struggling and sonI told her Inwould stay with her and did until she reached the top. I felt awesome today and it was nice to share that positivity with her. We made it to the top together and she was thrilled. 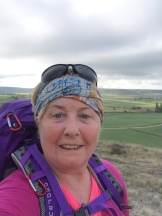 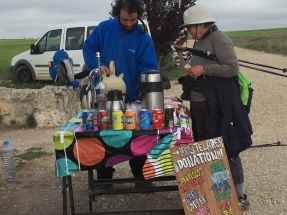 There was a beverage and fruit stand at the tip where for a donation you could have a drink or bite to eat. It was a lovely reward after that climb. As they say, what goes up, must come down and the descent is a killer on my knees. Even with the poles!!

It takes me a little longer on the way down but overall not too bad. As I hit the bottom a handsomen gentleman smiles and wishes me a buen Camino and then the look of recognition. It is the Italian man from Roncesvalles. We had s nice chat and he moved on. That is what it is like on the Camino. Yesterday, I didn’t mention Sylvie from Orleans who had a meltdown in Hornhillos because she couldn’t find a bed. She had received some bad news which I’m sure exacerbated the situation. She ended up in Castrojeriz also and we bumped into each other at the top of the hill. We ended up  walking together for the remainder of the day.

Stopping at an albergue in Itero de la Vega we found a bed and settled in for the afternoon. I met some new people. 2 German sisters (Bianca and Stephanie), Maria (Sweden) and Derek and Suzie from South England.  We bought a bottle of wine and enjoyed the 23 degree sunshine and company.

The pilgrim meal is not good tonight and I’m craving home cooked meals. As we get closer to Galicia we are all looking forward to pulpo (octopus). I’m tired of stale bread and lentil soup which didn’t hide well for those in close quarters. The ensalada mixta and tortilla patata are still the best bets.

We had some terrific laughs today and many were receiving Mother’s Day messages from home or trying to get in touch with their mothers. I was beaming when Inheatd from Phil and Joel! I attempted a FaceTime with Joel but ended up having a call with him instead. I also had a Facetime with Julie and was pleasantly surprised to see Torie, Ryan and Nikki along with my brother Kevin. The reception as poor and Julie and I made frozen faces which was hilarious! It was so nice to see them all.

It was time for bed and there I was laying in bed at 9:00 pm wide awake. My other roommates weren’t feeling well so they went to bed early. Nothing much to do in this place so might as well sleep.

It was a lovely Mother’s Day!

Happy Mother’s Day to all the moms following this blog.

One thought on “Mother’s Day on the Camino”