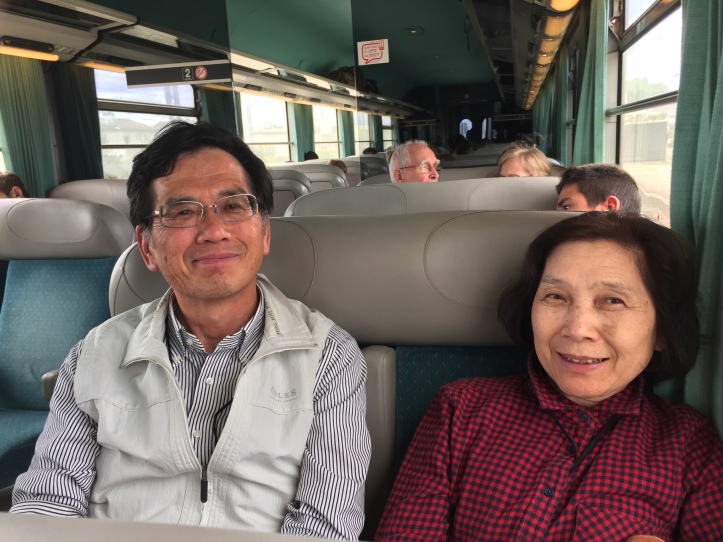 The flight to Paris was basically uneventful which is the way you want it.

Here’s my feedback to Air Transat. The food is barely edible! I get saving money but a dried up sandwich. They don’t give you mini-bottles of wine anymore. They certainly don’t come around for refills. We were able to smell the meat and veg the flight attendants ate but us paying customers had to unwrap cello- wiches. You received your first glass of water and then had to get refills at the back of the plane. At 5:00 am Paris time they announced we would be getting a delicious breakfast. Along comes the cart and the sound of cello again. This time it was a slice of cold pound cake wrapped in cello. Remember those honey buns in school cafeterias? A sponge version. Ick!! Coffee/juice was offered and no refills unless you got up to get it yourself. No personal TVs either. You either watched the show playing on the hanging monitors or had to use your own device where you downloaded the Air Transat app. I thought, “What a great idea!” And then discovered there was no power at your seat. 30 minutes and a dead phone or iPad. C’mon @AirTransat, use your noggins!

Not to worry, once in Paris I could hop on a bike that charges your phone for you while you get some exercise. Very cool!

The train ride was lovely except for a 25 min breakdown causing passengers some worry for connections but it all worked out. I met this lovely Japanese couple travelling to Biarritz to visit their daughter. They had been travelling for 25 hours and were still smiling. I forgot about the plane food.

The Europeans have this train thing figured out. Bring wine and bread, meat and cheese and picnic away!

Biarritz, located in Basque Country is beautiful. This is a location visited by English and French royalty. The buildings are impressive. Outside of my hotel is an open market.  I walked to the Bay of Biscay for a glass of Bordeaux and some sea air. Not sure if it was the long travel day or the air but I was starving. On the hunt, I discovered a tapas bar (Bar Jean) that served up a yummy Ribeiro and an array of tapas. I chatted with a couple (Sylvie and Adolph) from Strasbourg, Germany who were so lovely. We shared our love for wine whilst noshing down on anchovies, chorizo, cheese and wine. The day had to end so off to the local Carrefour convenience to pick up water and supplies for tomorrow. Navigating  the cobblestone streets back to the hotel, I turned in relatively early. Bon soir mes amies!